Ernst Billgren was born in Stockholm, Sweden, in 1957.

After several years of preparatory art school, Billgren was accepted into the Valand Art Academy in Gothenburg, where he quickly made his mark.

While still at the Academy, he began to exhibit his pieces in various galleries in Sweden and, with his fresh mix of materials and motifs, he soon earned the nickname “the critic’s golden boy”. Billgren found inspiration in traditional art and “reclaimed” the artist’s right to use animals and mythological motives for inspiration, and to use materials such as mosaics.

After graduation, Billgren started working for his old college, the Valand Art Academy, and a couple of years later, in 1997, he was made a member of the Royal Swedish Academy of Fine Arts. During the nineties, Billgren was also appointed professor at a number of art academies in Scandinavia. He continued to exhibit all over the world, participating in international biennales, as well as breaking visitor records at the galleries and museums of his native Sweden, where he had become a household name.

His never-ending curiosity about art has led him to work in various fields apart from painting and sculpture, such as movies, architecture, furniture and music. He is the author of several books, most notably the very successful “What is Art?”, a book published in several languages which discusses what Art really is about for those who dare to go beyond received opinions.

The Ernst Billgren label is to be found on 3,500 bottles of Costasera Amarone, 1998 vintage. Check for availability at the Serego Alighieri Wine Shop: serego@serego.it.

The profits from sales provided the funds for a study scholarship for a young art student chosen at the end of the project. 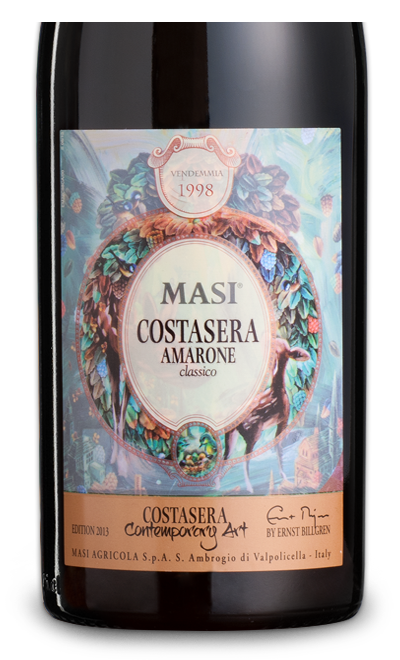